The radio is one of the major mass media for disseminating information and knowledge about health issues and creating demand for health services within the various interventions of N'weti. Both in magazine format and in spot format, radio, especially community radios, guarantee a level of reach that other media in Mozambique can not. N'weti's approach is to establish partnerships with the different community radio stations and to create the conditions to guide them to produce programs that are informed by radio production scripts on very detailed and practical health topics. In this way N'weti is contributing to the broadcasting of high quality programs at the level of several Community Radios spread throughout the country, highlighting the north and south of the country.

Tua Cena, Your Life, Your Choice is a radio program on Reproductive Health and Rights, Family Planning and Neonatal and Infant Maternal Health that has been on the radio since 2011. From 2011 to 2017 the program was broadcast on Rádio Sfm, Rádio 99fm, Radio City, National Antenna of Radio Moçambique and Community Radios of the district of implementation of the Project Tua Cena and Mais Vida in Maputo Province, Gaza, Nampula, Cabo Delgado and Niassa.

At the moment it is being transmitted in 13 Community Radios in the provinces of implementation of the N'weti Sofala and Nampula projects. With this program, N'weti aims to transmit to the adolescents and young people and community in general, correct information on Sexual Health and reproductive health, to assist them in making assertive decisions about their sexual reproductive health and rights.

This manual aims to provide the community radio stations operating in Mozambique sufficient information so that they can locally produce TUA CENA program, the production N'weti Communication for Health, adjusting it to the specific characteristics of the community they serve. 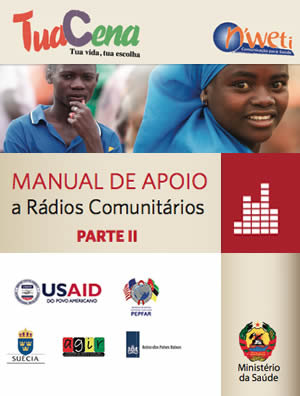 This radionovela tells a story where love is possible. Ibrahimo, a conqueror of the village of N'weti bet with friends who will take Ruth to bed. What he does not know is that Ruth will teach him to love and share. Rute shows Ibrahimo that it is possible to love and be with only one partner, while still being a real man.

"Vidas Mascaradas" is part of N'weti's campaign on Multiple and Co-occurring Relationships and aims to increase the perception of risk associated with the multiplicity of sexual partners and promote relationships to two strengthened by a deep intimacy, friendship and communication between the partners with regard to all aspects of life. "Vidas Mascaradas", produced in Portuguese and Macua, is directed to a target audience between the ages of 16 and 35, rural and semi-rural. This radio soap opera was broadcast on radios around the country at the end of 2009. From 2017 to 2018 it was broadcast on the radio program Dreams produced and broadcast by three radios in Gaza province, namely: Radio Mozambique - Provincial Issuer of Gaza, Community Radio of Xai-Xai and Community Radio Samora Machel in Chóckwè. Radionovela "Duas Caras" In 2009 N'weti returned to occupy the radios of Mozambican citizens, this time with "Dos Caras", a soap opera of 30 episodes combining the themes Domestic Violence Against Women and Pregnancy and HIV. The educational contents are brought to the audience by the voices of characters of determined character, such as the couple Regina and Juvêncio (who "defy" the context that surrounds them, deciding to postpone the decision to have children); of telenovelas, such as Telma, the radio broadcaster who decides to use the voice of a fictional woman to reveal her own experience on domestic radio as a victim of domestic, physical and emotional violence. The main objective of this program is to provide the audience with knowledge enabling them to make responsible and positive decisions about their own health and the way they are in society.

The primary target audience of "Duas Caras" is the rural and semi-rural population between the ages of 16 and 49. "Duas Caras" is being broadcast on about 30 broadcasters, including Rádio Moçambique and several community radio stations in Portuguese, Chnagana, Sena and Macua. At the end of 2006 and beginning of 2007, the radio soap opera N'weti entered the home of Mozambicans with their tips on various health issues (with special attention to HIV and AIDS, tuberculosis, and the harmful effects of tobacco consumption) addressed in the format of entertainment par excellence that constitutes the drama in radio.

The 45 episodes that compose this radio soap opera were initially issued in Portuguese language, through the 10 provincial emitters of Radio Moçambique; later they went to the air also in Changana and Macua, through more than 40 community radios to operate in the country.

The radionovela was retransmitted in the Portuguese language services of Channel Africa, South African channel SABC heard throughout the African continent.